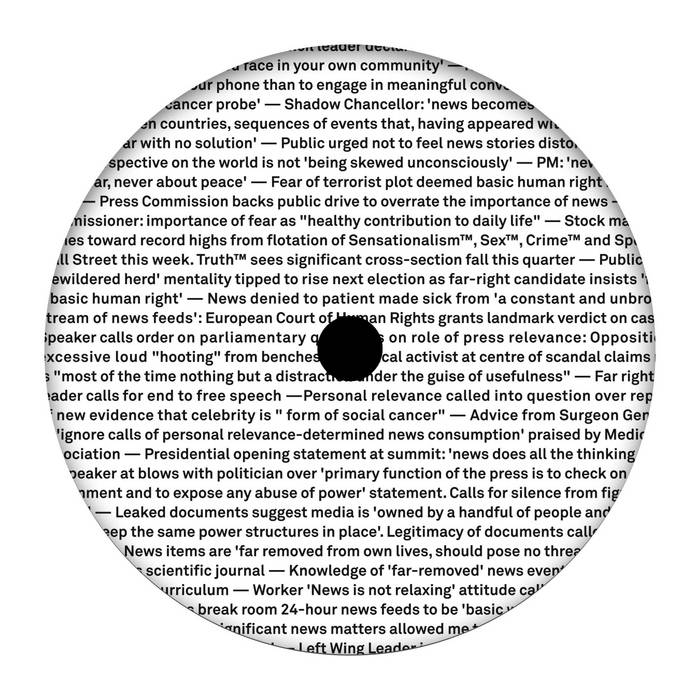 UIQ welcomes Sim Hutchins to the hyperprism with Vantablank Stare, an insightful A/V project born from a personal discontent with the vacuous repetition of 24 hour rolling news coverage, and presenting a critical response to, in his own words; "the daily bombardment of news items on corruption and our societal
inclination."

The video comes as an embed code / website which runs the entirety of the record on loop. Language translations are switchable between English, Russian and Arabic.

The EP’s three tracks of roiling post-junglism and fractured dub techno tessellations most acutely recall the tumbling designs of N1L and Lanark Artefax 12”s but, its conceptual drive is closer to Sam Kidel’s Disruptive Muzak in the way it extracts from current socio-political issues ubiquitous to nearly all our lives, and especially for anyone living in the UK right now.

The dissection of its subject is most literal in the accompanying video, presenting stark, stock CGI representations of those coldly contemporary news studios that we’ve all seen too much of in recent times, with accompanying banners ribboning fake “statements” and “breaking news” that, on first glance, are almost indistinguishable from the ‘real’ thing, yet coolly subvert the text to their own end, exposing its function as a tool for public control.

However, the music is less literal and more elusive, abstract and metaphorical, using samples of radio waves, covert signals and intercepted E-Comms as the raw material for an impressionistic tussle of invisible forces, translating as head-stretching recursive phase shifts and disembodied jungle structures in Some Men (you) Just Want to Watch the World Burn and as an allegory for passive, anxious textural attrition in Nescience Is Not Ignorance on the A-side, whilst the B-side unfurls a knottier tract of warped, quicksilver dubtechno with Some Men (me) Just Want to Let the World Burn, which, you’ll notice, contrasts with the title of
the A-side, and lays bare the artist’s paradoxical dilemma; highlighting the difference between disrupting the system and sitting back and waiting for its inevitable demise.